About 2 years ago, a photovoltaic system was installed on the roof of the row house built in 1991 in Darmstadt. Since then, this pioneering Passive House project has been producing its own electricity, thus fulfilling the criteria of a Passive House Plus building. The official certificate was recently issued. 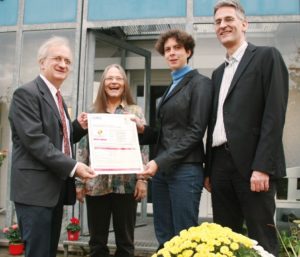 “Passive House buildings are perfectly equipped to utilise renewable energy. With their extremely low heating energy demand, it is even possible to derive as much energy from the sun on-site as is consumed in the house over a year”, explains Dr. Wolfgang Feist. Together with his wife Witta Ebel he recently accepted the Passive House Plus certificate.

Photovoltaic system for the anniversary

Twenty-five years ago, building physicist Dr. Wolfgang Feist built the world’s first Passive House, thereby establishing this energy efficient construction Standard. Since that time, the founder and director of the Passive House Institute and his family have lived in the terraced housing complex in the Darmstadt city district of Kranichstein. In the year of its 25th anniversary, the Feist family installed a photovoltaic system on the roof of their house with a surface of 26 m² in order to utilise the sun’s energy. 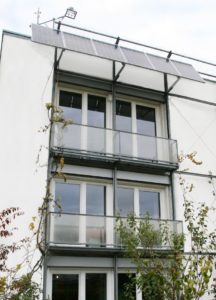 The building’s two-part solar photovoltaic system covers 26 square metres and is mounted on the terrace as well as on the roof.

With the Passive House Plus Standard, Passive House has contributed to the second step of the energy revolution. In addition to being highly energy efficient, it also generates on-site renewable energy. What matters here is that the energy demand of a building is considered and optimised separately from the energy generation.

Good basis for Passive House Plus

In a Passive House Plus building, the upper limit for the total demand for renewable primary energy is 45 kWh/(m²a). At the same time, at least 60 kWh/(m²ta) of renewable energy must be generated based on the projected building footprint. From the very beginning, the Feist family equipped their house, which has a living area of 156 m², with extremely efficient devices. The electricity consumption is therefore very low, even with the operation of the ventilation system. 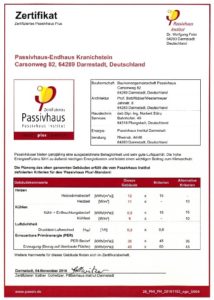 The certificate confirms that the world’s first Passive House building in Darmstadt-Kranichstein successfully produces and uses renewable energy as required by the Passive House Plus certification class.

Heatpump with reduced energy use

The same also applies for the air-to-air heat pump that was recently installed for test purposes this past autumn, which is used for heating and, when necessary, cooling in the Passive House. This electrically operated heat pump should use approximately 30 Percent of the energy consumption that was previously required with natural gas for the gas heating system.

Electricity surplus into the grid

Saving in network is useful

“For a single household, this kind of seasonal storage is not a reasonable option, but in the network this “gap” becomes smaller and storage becomes much more cost-effective. This is what needs to be done in future”, explains Dr. Wolfgang Feist.

You may also download this press release as a PDF.

© International Passive House Association, 2018. Unauthorized use and/or duplication of this material without express and written permission from this site’s author and/or owner is strictly prohibited. Excerpts and links may be used, provided that full and clear credit is given to International Passive House Association with appropriate and specific direction to the original content.

Carl supports our international communication activities and is the point of contact for administrative enquiries.

Giorgia supports our international communication activities, working with our affiliate organisations to raise awareness of the Passive House concept.

Kintijia supports our international communication activities and is the point of contact for administrative enquiries.